Pittsburgh Institutions are Trying to Reduce Food Waste, but at What Cost?

The piece highlights efforts at Pitt to reduce waste with dining hall “waste audits.” Based on results of these audits, Pitt is able to strategically plan meals to reduce the amount of waste generated. But is wasting less translating to fewer donated meals to those in need? Read on!

University of Pittsburgh freshman Naydia Rowe recently grabbed a plate of french fries at dinner. But when she tasted the fries, she realized they weren’t fresh. She went back and got a new plate.

“I do feel bad because not everyone has food and I’m out here wasting a plate of good fries,”
she said.

The University of Pittsburgh’s largest dining hall, Market Central, wastes nearly 1,000 pounds of edible food per day. Their waste contributes to the 130 billion pounds of food wasted in the United States every year, at a cost of $161 billion. 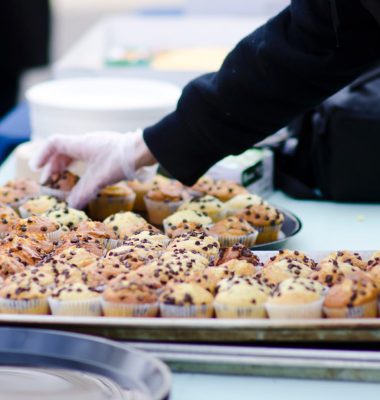 The U.S. Department of Agriculture aims to cut food waste 50 percent by 2030. A group of philanthropies recently released a report on how this could be done. The report, called ReFED, suggested it would cost $18 billion to achieve but would reap more than $100 billion in economic benefits, in addition to environmental ones.

Several large Pittsburgh institutions, including hospitals and universities, have begun implementing some of the report’s recommendations. The efforts include everything from digging through garbage cans to taking photos of all the food that is thrown out. The report outlined more than two dozen strategies, and these institutions are taking on several of the most promising.

But, in some cases, reducing food waste has had unexpected consequences: taking food from the needy.

Watch What You Waste

One of the first steps to reducing waste, according to the experts, is to identify what and how much is being wasted from plates.

For the last two years, Pitt volunteers have made a regular habit of putting on rubber gloves and scraping uneaten food into slop buckets at the university. Led by Nick Goodfellow, the food service sustainability coordinator, they’ve now conducted 10 “waste audits” to measure how much food students are wasting and to identify patterns.

At Market Central, they’ve found that the mostly freshman diners each waste more than half a chicken breast per meal on average.

At one waste audit, they saw omelettes weren’t being finished, so they cut the number of eggs down from three to two. And the stir fry wasn’t being finished either, so they started serving it in smaller bowls.

Executive chef Bill Ward decided to take this even further and reduce the size of the plates. Instead of a dinner plate, the main meals would be served more like tapas: a little bit of chicken, a little bit of rice, a little bit of green beans. That way if students didn’t like it, they wouldn’t waste as much.

Smaller plates could reduce food waste by 178,000 tons in the United States, the sixth most promising strategy, according to the ReFed study.

At the end of the most recent waste audit in February, the total waste had fallen to less than 900 pounds, about 5 percent less per student.